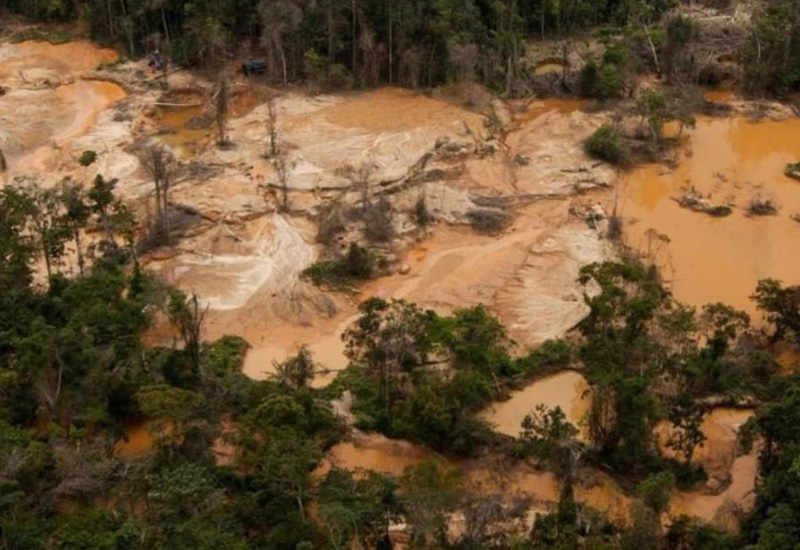 The Amazon, whose 65% of territory is in Brazil, has been consumed in flames for more than 17 continuous days. According to the Brazilian National Space Research Institute (INPE), between January 1 and August 22 there have been 76.700 fires throughout its length, of which 9.500 have been reported since last week. They have burned more than 1. 5 million hectares of forest of the world’s largest forest reserve, home to 3 million natural and animal species, and which provides 20% of the world’s oxygen.

Although fires in the Amazon are a recurrent phenomenon, however, their number have increased a dramatic 85% since Jair Bolsonaro took over the government in Brazil in January 2019. According to the Brazilian National Institute for Space Research (INPE). His promise to “open up” the Amazon rainforest to the agro-livestock and mining industries, to deregulate environmental and legal protection for indigenous communities; have advanced thanks to his “revisionist» government team.

Bolsonaro’s extreme right-wing administration, has counted with the unrestricted support from the cattle and agricultural business sectors, who insist on their need for “more land” to grow their businesses and thus promote illegal deforestation. Recently, the local newspaper Novo Progreso (state of Pará) called for a “Día do Fogo” (“Day of Fire”), in which dozens of farmers burned their own properties to show their support for President Bolsonaro.

Several prestigious environmental organizations, recognized in Brazil for their work in favor of the protection of the Amazon, denounce that the fires are caused by the farmers in pursuit of more land; they’re not spontaneous.

Thus, Bolsonaro, who has proclaimed himself the “chainsaw captain” has deregulated the environmental protection of the Amazon, promoted the extension of arable lands in the region , run over the indigenous peoples, cancelled international agreements for the protection of the Amazon (like the “Amazon Fund”) and ignored deforestation statistics. He dismissed, at the beginning of August, the director of INPE, engineer Ricardo Magnus Osorio Galvao, after the Brazilian deforestation monitoring agency released data revealing the real scale of the environmental disaster, and, finally he accused environmental NGOs of setting fires as part of a “conspiracy” against him.

In other words, in Brazil, the government deregulated environmental protections and, with the support of an authoritarian president, promoted and allowed the destruction of the Amazon and the displacement of indigenous peoples, in order to appropriate their lands and natural resources. Its right-wing, and aggressive economic program, advances in spite of any environmental consideration, international commitment  or responsibility that exists in preserving the world’s last great forest reserve, on a planet that is inexorably heading for climate disaster at the hands of capitalism, an unsustainable economic system that requires for its expansion of all possible natural resources:a predatory system.

But in Venezuela, we are suffering also an environmental disaster in our forest. The title of today’s article “Amazon, the business of this world«; reminds us that Venezuela is an integral part of the Amazon. Through the cinematographic work of Carlos Azpurua: “Yo hablo a Caracas” (1978), “Caño Mánamo” (1983) and “Amazonas, el negocio de este mundo” (1986), we began to become aware of what was happening in our extensive jungle territories south of the Orinoco River, ancestral lands of our native peoples, an immense reserve of freshwater and natural resources.

These were the years of denunciation: despite the problems and limitations imposed by the governments at that time, the period known as the “IV Republic” (before president Chavez government), the parties of the left or the progressive  movements of our country were not afraid to denounce and fight, because they did not  have any kind of commitment with the government decisions. Their actions were rebellious, free, and, consequently, it fulfilled its historic duty to stand by the most vulnerable peoples, in defense of their culture and traditions, in defense of our sovereignty, our immense natural resources, our rivers and forests.

The political documentary “Amazonas, el negocio de este mundo”, which gathers statements and testimonies of indigenous people, peasants, and the  Catholic Apostolic Vicary, denouncing the illegal activities and presence of US evangelical group  “New Tribes Mission”, made visible to the general public what was happening in our Amazonian territory.  It gave the people a dimension of the vast amounts of strategic mineral resources contained in the bowels of the jungle that lastly were and always have been the objective of foreign interests and economic groups that flourish in that territory.

Like Bolsonaro, who today in Brazil stimulates the depredation and uprooting of the Brazilian Amazon in pursuit of economic benefit of an area that is supposed to be protected, Maduro is now inflicting worse damages in the Venezuelan Amazon than those that were denounced then by Azpurua in his documentary.

Maduro is the perpetrator of the environmental disaster of the ¨Mining Arc¨, a number of mining concessions, mainly for gold, but also for coltan, diamonds and other minerals buried in our part of the Amazons. There, our environment, forests and water reserves are depredated, our lands illegally appropriated, the indigenous people displaced, in favor of the depredatory exploitation of strategic minerals for money.

In its customary exercise of cynicism, the venezuelan  government issued a communiqué in which it expresses “his concern” about the “very serious impacts” of the fires in the Amazon. . . “on the population, the ecosystems and the biological diversity of the area, . . .” This is said by a government that, based on an infamous lie, has developed the so called “Mining Arc”, a distorted version of president Chavez plan for the region.

What President Chavez thought of the “Mining Arc”, where the Orinoco River, would be the hinge, the axis of complementary development of both of its sides: on the north, the Orinoco Oil Belt, a huge oil new project, in the south our existing mining and industrial development including Ciudad Guayana, Ciudad Bolívar and the Pijiguaos. His originally idea had nothing to do with intervening environmentally protected areas, or National Parks, or promoting illegal small-scale mining, or employing the destructive methods of open-pit mining. Much less displace our indigenous peoples, nor to hand over the exploitation of our strategic resources to transnational companies such as the Gold Reserve or the economic groups that surround maduro; or the military promoting the proliferation of uncontrolled small-scale mining and the presence of irregular and paramilitary groups.

The “Mining Arc” of Maduro (Decree No. 2.248 of February 2016), has meant handing over to mining, more than 111.843,7 square kilometers of Venezuelan jungle and Amazon territory, 12% of our national territory: an area larger than Cuba, Iceland or South Korea. It includes environmental reserves and legally protected indigenous territories, inhabited by more than 198 indigenous communities. At least five protected areas in Venezuela are already being deforested by illegal mining activities. Seven natural monuments and five national parks scattered throughout Venezuela’s “Mining Arc” are being devastated. One of them is the “Canaima National Park”, declared Natural Patrimony of Humanity by UNESCO, it ranges 30.000 square kilometers and is characterized by its extensive jungle, “Tepuyes”, the world’s tallest waterfall, the “Angel Falls”, in addition to a rich flora and fauna.

Maduro’s Decree establishes areas for the exploitation of several minerals like gold and coltan, the two minerals that have made headlines since then, but also diamond, bauxite, copper, dolomite, iron, kaolin and rare earths; without its required environmental impact studies, let alone their respective remediation plans for a region where more than 5.000 species of insects have been counted approximately 5.000 species of plants, 850 species of birds, 205 species of amphibians, 204 species of reptiles, 257 species of mammals and 654 species of fish.

These decisions were taken unilaterally and without any consultation by the Maduro government, lying about the fact that this had been “ President Chávez’s idea”, but also in flagrant violation of international treaties on environmental protection, the Constitution (1999), the “Law on Demarcation and Guarantee of the Habitat and Lands of Indigenous Peoples” (2001) and the “Organic Law on Indigenous Peoples and Communities” (2005). Consultations with the indigenous peoples, inhabitants of these lands, were not carried out, their lands were not respected, and the ancestral way of life of the different ethnic groups not respected.

In addition to environmental devastation, indigenous peoples have been displaced from their lands or absorbed by illegal mining activity; the living conditions in the camps, the precariousness of social protection, the absence of authority and presence of the State, has pushed them into criminal activities, prostitution, poverty and disease, such as the resurgence and spread of malaria and other diseases, as well as mercury contamination.

A separate mention should be made of the presence of military business enterprises in the extractive mining activity. Officers and entire components of the Bolivarian National Armed Force are exposed to illegal and corrupt activities. The Armed Forces are placed in bidding for the business, to protect areas of illegal activity, to coexist with irregular or paramilitary groups, in a mix that has not produced any good results. A profound damage is done to the institution that has the monopoly of violence, and which is supposed to be the guarantor of our sovereignty and territorial integrity.

Maduro does what he wants, he is not accountable to anyone, without the country under any kind of rule of law. Maduro seeks to deepen is an extractive, wild, brutal, predatory mining model,  advancing above all institutions, to concretize and satisfy their plans and corrupt interests, in his disastrous and unsustainable economic program, evidently right-wing, predatory and that violates the rights of indigenous peoples.

Gold, coltan, diamonds are exploited from our homeland for the benefit of a new political class, very corrupt, that has emerged with Maduro, and which has made the exploitation and appropriation of these minerals one of its income sources. Without being accountable to anyone, sweeping the floor with the “fifth objective” of the “Plan for the Homeland” approved by the Venezuelan people and law of the Republic that calls for the “preservation of life on the planet and for saving the human species”. Sadly the riches of the Venezuelan people reach any world without questions asked if they are stained with blood.