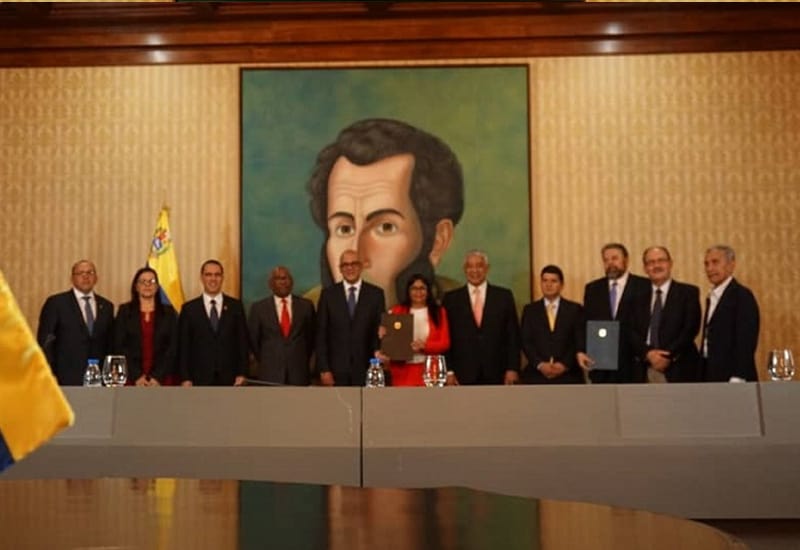 Behind the circus that Maduro and Guaidó have set up, what’s coming is confrontation. The two groups disputing power have resorted to a circus to try to hide  their true intentions.

The negotiations promoted by the Norwegian government are shipwrecked due to  intolerance and lack of political will on the part of the parties. Those who have negotiated do not represent the country, lack legitimacy, unity in their purposes and are not even sovereign in their decisions.

This laudable initiative of the Nordic country was sabotaged from the beginning and its result  similar to those supported by Pope Francis and the negotiations in the Dominican Republic. These efforts  have been used by the parties to gain time and catch some air, in that eternal “dispute”, where the country is the only victim.

Now each party invokes to its usual maneuvers to distract the attention from their own failures and their true intentions. The madurismo tries to hide its manifest incapacity to lead the country and the economy; and the extreme-right wing opposition wants to hide their intolerance and the political unfeasibility of handing over what remains of the homeland to the foreign interests.

Madurismo made a simulated «national agreement»; from recruiting  factions and dispersed personalities from the traditional opposition while announcing  with the usual fireworks that «now they do» have an agreement with the opposition. The agreement itself is a single of contradiction:

It is also not clear whether the recognition of the National Assembly means that its constitutional powers in regards to  the election of the powers of the State are thus restored: Supreme Court of Justice, Attorney General and National Electoral Council, are they now suddenly legitimate? The National Electoral Council will be renewed, has been announced . After such a long time, on which institution will fall to, the NA or the NCA ? on the basis of what criteria? Will the Constitution be respected, at least in this matter?

Political prisoners will be released, has been said . Which ones? Based on what criteria? And the political prisoners of Chavismo? The workers of PDVSA and other state enterprises, the military and social leaders kidnapped by SEBIN, what about them?

Madurismo, through the commission of its “own truth”, releases some political hostages. Zambrano was released, I am happy for the vice-president of the National Assembly, I denounced his prison, he should never have been imprisoned or kidnapped, I hope that now he will advocate for the hundreds of hostages or kidnapped like him who are still in prison.

But it’s just that, a released hostage. We should demand the release of all those detained for political reasons, including those linked to Chavismo, workers and the military. We cannot accept that Maduro acts as Juan Vicente Gómez did, that he liberated whoever he wanted and only because he wanted, either so that they would die outside of prison, or because he no longer cared politically. At this moment in the country there is no rule of law or due process, as the United Nations High Commissioner for Human Rights, Michelle Bachelet, courageously has denounced.

On the side of the extreme right-wing opposition, after the role of guaidó in his embrace with the narco-paramilitaries of the “Rastrojos»;, they have to distract attention, say anything to divert the gaze of public opinion. He now “reveals secrets»; of his rites with Madurismo, in Barbados or Norway that nobody cares about.   He even reveals that he deviates from his presidential aspirations, in favor of a “transitional government»; based on the experience of 1958, just in his case, not a patriotic one.

Guaido’s image advisors and sponsors will take him on a PR  tour to the General Assembly of the United Nations: ,, they must try to wash his image  after the pictures with the paramilitaries. From there he will start a new wave of announcements and agitation.

By the way, Guaidó will occupy a space ceded by Maduro, who does not dare to go to the UN in New York,  because he has nothing to say, he cannot show his face, besides the terror he has for his security. Maduro sent his “bumper cars» to the UN. The circus should continue, but now at the headquarters of the United Nations. What a role for these gentlemen!

Behind this circus that Venezuelan politics has become, powerful forces and interests continue to sorround our countryy, as the shark approaches its prey.

The National Assembly, or what remains of it, approved and opened the doors to ITRA, the Interamerican Treaty for Reciprocal Assistance, . , an entelechy ofthe cold war; conceived  as an an instrument for US interference and interventionism in the region that was pulverized when in the Falklands War, Argentina invoked it to avoid English aggression and the response of the US was that, over and above the ITRA, were the NATO agreements, which is why they provided all the military support for the British military operation to retake the islands.

The ITRA is a mechanism denounced and abandoned by countries such as Mexico, Peru, Nicaragua, Bolivia, Ecuador and Venezuela, it is invoked again to  threaten our country with a foreign intervention . We’re getting closer and closer to Noriega’s Panama scenario .

The political sectors of the country are playing with fire and we are all going to be burned . Madurism challenges all, cries out for war, seeks confrontation, mobilizes troops, threatens, plays war. The opposition of Maduro, the extreme right, calls for an invasion, invokes the ITRA , promises the invading forces “cleansing» and looting. Irresponsible calls since , not one of those from the elites  puts the dead.

A phenomenon that allows us to measure the level of debasement of the society, or a sector of it, that shows the deterioration of our national consciousness, is that there exists in the country a segment of the population, fortunately a minority, which for the first time in our history, cries out for an invasion. Thus, the hypothetical invading force has in the country what is most difficult for them: nationals who favor them, surrenderers willing to  open the doors for them to stain the soil of their homeland.

The weakness of the homeland, its wear and tear, the destruction of its economy, its institutions and the violation of its constitutional framework, the departure of more than 4. 3 million Venezuelans, together with the clumsy and weak leadership of Maduro make us, as never before, vulnerable to any aggression. A surrenderist and antinational right wing political faction acts  as a base of support to legitimize an invasion.

We insist that a Patriotic Government Board is the only one capable of re-establishing the Constitution and defending our sovereignty and territorial integrity. It’s not a “Fool Board”, it’s patriotic. Regroup the chavista sectors, patriotic military, Bolivarian, social movements, parties of the extinct Patriotic Pole, the popular sectors, workers, professionals, intellectuals, call on the national sectors, beyond our own ranks, that immense majority of the country that is tired of conflict and sterile disputes. Calling on all sectors, including the opposition, not the extreme right, I speak of the sectors of the country that are hurt by what is happening and are willing to get rid of blackmail and leave hatred behind. We must stop this disastrous  circus before it’s too late.

The Bolivarian National Armed Force has in its hands the great responsibility of re-establishing the Constitution and the sovereignty of the people. In your hands lays  the future of the country. Until now they have yielded and subordinated themselves to this disaster, their weapons have sustained this tyrannical government, led by an elite that acts on the margins of the Constitution and the interests of the people. On the other hand, they have stood firm in defense of the sovereignty of the homeland in the face of external threats, and they have not yielded to the pressures of the extreme right to hand over power to the enemies of our people; they have done well.

But under  their watchthe Esequibo, oil, gas, PDVSA, Arco Minero are given to foreign interests , the Constitution and laws are violated, social rights and guarantees are violated, national sovereignty is violated.

You are prisoners of a false dilemma. You owe yourselves to the people and the Constitution, not to Maduro or Guaidó, they are two sides of the same coin. We are dealing here with  the question of returning to the Constitution and the Plan of the Fatherland that our people supported for the most part in the 2012 elections, before the death of President Chavez, before the chaos of Maduro.

You, soldiers and officers of the Homeland, Bolivarians, must assume, take into your hands the proposal of the Patriotic Government Junta, this is the last opportunity to do something for the future of the country, to re-establish peace, rights and guarantees of the people.

You have the leadership and the principles, you are the only institution left standing and you have the responsibility and capacity to restore constitutional order and save the country from this circus of death.