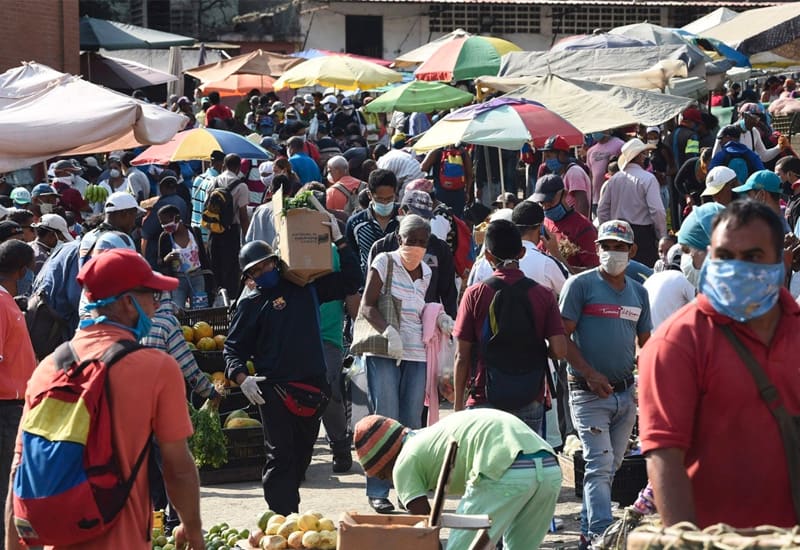 Finally, Maduro announced the increase in gasolineprice and also the privatization of fuel distribution, which will be sold at international levels. The government advances in the implementation of its package by dollarizing the economy. It is making our country more and more unjust and unequal and our people poorer, the country of the bodegones. These Bodegones are a creation of Maduro’s government, although he, in a cynical way, says to «not know» about them.

The increase in the price of gasoline and its privatization have been part of the proposal of PDVSA’s “Restructuring Committee” to hand over the company. We denounced this proposal last May 1st.

Maduro announces that the price of a liter of gasoline will be 5000 bs/liter, up to 120 liters for vehicles and 60 liters the motorcycles per month. This price is just for the people who have a special government issued ID called “Carnet de la Patria”, which is one of the government’s mechanism of social control. This means that the citizens must have 600,000 Bs. to fill his car’s tank and 300,000 Bs. to fill his motorbike’s tank. This seems to be easy for the small sector of the population who can afford to go to the Bodegones. These are exclusive and expensive local grocery stores that only accept dollars. However, in the case of the great majority who live on an average minimum wage of 400.000 Bs. a month, it is difficult or impossible tostop eating or buying medicine to fill a tank of gasoline.

The government explains that above this amount of liters of gasoline available at 5,000 Bs., the citizen will have to pay for gasoline at international prices. This means that they will have the same prices that are paid in Europe or in the US where the average minimum salary are around 1500 euros and 1200 dollars respectively. Instead, Venezuela is a country where the average monthly minimum wage is 2 dollars.

The government imposes this brutal rise in fuel prices and intends to bring it to international prices in the country with the largest oil reserves on the planet. Our country counts with a national refinery park capable of producing, as we did until 2013, 1.3 million barrels of fuel per day.

To top it off, the government shows its true intentions by giving 200 fuel stations to private individuals, its private individuals. They will sell the gasoline there at $0.5 per liter. This means that a person with a 40-liter vehicle must have $20, equivalent to 4,000,000 Bs, to be able to fill its tank with gasoline. Thus, the government inaugurates «the Bodegon of gasoline.»

The increase in gasoline at these outrageous prices, or at international prices, has been imposed on a country that has been subjected to six years of economic catastrophe. In the country 80% of the population isimpoverished, the popular classes are desperate and the middle class and professionals are doing magic tricks to survive with an average monthly minimum wage of only $2. There is hyperinflation and shortages, and theeconomy is in a deep and prolonged recession with a drop of 64%. At the same time, we have a shattered oil industry, a government without credibility, without a plan, governing in favor of a wealthy and rapacious elite. We have an obese, unpopular and indolent government with no morals to demand sacrifices from the people.

I remember that the Iranians proposed to us to implement this same scheme and all of the control devices that the government now applies in the country. President Chavez rejected the proposal.

We would not impose an excessive price on domestic fuels, which should be produced in the country since we are an oil-producing country. Our oil exports more than compensated for the subsidies in favor of our population: gasoline, diesel, gas, water, and electricity. And if that weren’t the case, what’s the point of having oil? It is one thing for utility rates to cover operation and maintenance costs until they leave a reasonable margin for expansion and improvement. However, it isquite different to turn public services into a private business, in favor of private interests. That is what Maduro’s government is doing.

Faced with the increase in the price of gasoline at international prices, some questions and answers arise: whose oil is it? The Venezuelan people’s, since 1829, thanks to the Liberator Simon Bolivar and his Decreeof Quito and thanks to all of our Constitutions, including the current one. Who created the oil? Nobody, it is there, it is a benefit of nature in our territory, our country. Who extracts and processes the oil? PDVSA, our national oil company, a company at the service of the people; therefore, the price of the gasoline it produces for the internal market should only cover the costs of its processing. What are PDVSA’s current costs? We do not know since nothing is knownor made public about PDVSA nowadays. It has been destroyed by the mismanagement of this government. Did we produce gasoline in the country before? Yes, until 2014, more than a million barrels of fuel were produced in the country. We were able to satisfy the internal demand, and export our fuel as well. Howmuch fuel does PDVSA produce at present? Nothing; it is neither capable of operating its refineries nor caspable of producing fuel. Do the Venezuelan people have to pay the cost of the inefficiency and incompetence of the government in PDVSA? No!

Nothing justifies this increase. The Venezuelan people are by constitutional mandate the owners of the oil and PDVSA the national oil company of all Venezuelans. Its responsibility is to extract and process it for the benefit of the people. The people do not have to pay for the inefficiencies, improvisations, and mismanagement of the government at the head of PDVSA.

During all the years of President Chavez’s government, we worked in PDVSA to guarantee the satisfaction of the internal consumption needs of our people. These allowed them to count on fuels at a national price. The country’s economy was growing, and led in favor of the great majorities.

We have said it, we have been denounced it, despite ofthe accusations and the persecution of the Madurismo: the real plan of the government is to hand over PDVSA and our oil to private and transnational capital. They have destroyed the only economic strength we had, the only company capable of processing our oil and guaranteeing the internal demand for fuels. They are now handing it over in the interest of their private partners.

The increase in gasoline prices is part of Maduro’s package. This government is imposing on the country the most violent and senseless neoliberal adjustment program ever carried out. CAP’s package, its formula for adjusting the price of gasoline, which triggered the Caracazo, was a child’s game compared to what Maduro is doing. The thing is that CAP did not have the FAES, Maduro does.

What an irony that this government which keeps attacking the governments of the IV Republic is doing things that not even those governments did. The Venezuelans are people that have always been betrayed by their rulers. Only Chavez died governing for the people although his memory is riddled every day by this government.

The government has liberated prices, lifted controls, privatized companies, eliminated benefits and ended social achievements. It has «reduced the workload» as the neoliberals like to say, to bring the minimum wage to the hemisphere’s lowest levels of $2 per month. It is now lifting gasoline subsidies, raising its price to international levels. It is the same recipe of the IMF, the only difference is that this agency is not even willing to recognize Maduro`s legitimacy.

Amidst the applause of the PSUV and its National Constituent Assembly, the government strikes the poorest, in the midst of the worst economic crisis in our contemporary history. It imposes a brutal right-wing economic adjustment program which condemns millions of Venezuelans to misery and poverty.

Supported by the violence of the FAES and other repressive bodies, the government imposes a package of shock measures on the poorest population. Maduro rules for the elites, for the minority of privileged people who have access to government business or dollars. He rules for the public who can go to the bodegones, for the privileged of its government.

Maduro rules against the interests of the people. Why is such a high price being imposed on gasoline which is vital for the transportation of citizens? Why make this neoliberal adjustment if the people are facing the worst economic crisis in our history? Why charge international prices for fuel that should be produced in the country, with Venezuelan oil?

It must be made clear that this government is neither Chavista nor revolutionary. It must be judged by its actions. This is a bad right-wing government that, amidst chaos and violence continues to squeeze the people. It puts on their shoulders the full weight of its incompetence, the cost of its abysmal mismanagementon the shoulders of the humble and the workers,.

Now the excuses and justifications will begin. It is the «American sanctions», «an imminent invasion», another «conspiracy», another «secret plan» unveiled by the government. Its spokesmen of hate will lash out at Chavez’ government, at its ministers. Now, all the ills of this country are Chavez and PDVSA’s fault. Maduro will have to repeal the laws of Chavez’ government, the Organic Law of the Reordering of the Internal Market of Liquid Fuels of September 2008. This lawstopped the privatization of gasoline initiated by L. Giusti during the «Apertura Petrolera”.

People are already tired of so much chaos, of so many abuses, of so many bad decisions. The people are suffocated among the lack of electricity, water, gas, and food. They remain in an infinite quarantine among the FAES, the gangs, the bad news, the censorship. Thecountry is tired of this bad government.

The old and new elites will applaud Maduro. There will also be Chavistas who have adapted to this disaster who do not want to lose their privileges or who remain silent from their seats. Maduro sweeps away the economic and social conquests achieved during the period of President Chavez, including those achieved during the governments of the IV Republic, of AD and Copei. Maduro ravages everything!

If the people do not fight for their rights, if they do not mobilize in defense of their interests, they will continue to privatize everything: PDVSA, oil, gasoline, then it will be the gas, water, electricity, transportation. All in the name of Chavez, all with an excuse, a justification. They continue to destroy the country with violence and lies. The increase in gasoline prices is immoral, unjustified, and profoundly anti-popular. No to the increase in gasoline!