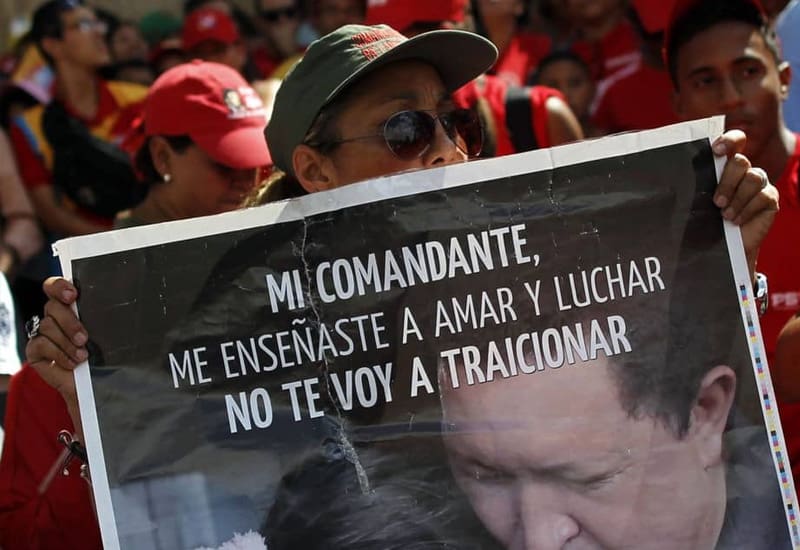 “…tear the darkness for an instant, shine just above the abyss, and return to get lost in the nothingness”

Beyond the current controversy over the authorship of the beautiful letter attributed to the Liberator Simón Bolívar addressed to his cousin Fanny du Villar a few days before his death, I would like to consider it as true and extract from its content these lines that, without a doubt, have been written by a Bolivarian heart; lines that we have made our own ever since we read them for the very first time in the works of Chino Valera Mora and until we heard them being recited over and over again by President. Chávez, who was always deeply moved by the epic life of the Father of the Homeland.

These lines summarize the Bolivarian tragedy of the time, after the death of the Liberator and, just like a sort of premonition, that of now, two hundred years later, with the death of President Chávez.

The Chavismo is lost in an abyss, buried by the madurismo that stands on the ruins of the Bolivarian project and the homeland as a whole. The V Republic was overturned here, and many fail to realize or do not want to realize so, starting with the PSUV itself which should be the guarantor of the revolutionary path, but decided to do “whatever maduro says”.

What we have now in the country is far from being a revolution; it cannot even be considered a progressive government, or a popular or nationalist one, not even a Chavista or socialist. Nor can it be classified as a good center government of social democratic direction. In other words, nothing that can be supported and continue to give it time: it is a government of elites, very authoritarian and repressive and deeply incompetent, that has swept away the legacy of President Chávez. This government has torn apart our institutions and our social and economic conquests to violently impose, instead, an economic model that has destroyed the country, as we demonstrated based on the same figures issued by the BCV. Rooted in the plundering of our natural resources, it has made the country much more dependent, plunging our people in the most abject misery, never before seen in the country. This government has pushed our country back to positions of underdevelopment and poverty that place us at the bottom of the world, with no possibility whatsoever to even ensure the survival of the population, let alone their development.

The latest report of the United Nations High Commissioner for Refugees (UNHCR) and the International Organization for Migration (IOM) indicated that four million (4,000,000) Venezuelans have fled the country since the end of 2015 to date. In just seven months, from November 2018 to date, one million Venezuelans have left the country. The majority of the people go to Colombia (1.3 million), Peru (768 thousand), Chile (288 thousand), Ecuador (263 thousand), Brazil (168 thousand), Argentina (130 thousand); the rest of them flee towards Mexico, Central America, the Caribbean, the United States, and Spain, essentially.

It is impossible to live in Venezuela nowadays; it is a country from where its youth escape, the families split apart, leaving only the elderly and children behind. We have denounced it, we have said “do not leave”; we have exposed the passage of the Andes as the exodus of a betrayed people. The madurismo still does not care. They use the tragedy as propaganda every time they get a few to come back to the country. This is the country of the ministry of manipulation and lies. They try to avoid reality in the world of “twitter” and its “trends”.

On the other hand, according to its last report, the United Nations Children’s Fund (UNICEF) states that “about 3.2 million children, meaning, 1 out of every 3, are in need of humanitarian assistance”. Moreover, it points out that “child mortality increased by 50% between 2014 and 2017.” Additionally, it recognizes the hundreds of cases of diseases such as diphtheria and measles, which had been virtually eradicated in Venezuela before Maduro, that currently attack our children. These numbers, which we will not find in any official bulletin of the Ministry of Health since the government has banned the issuing of any sort of statistic, represent a denunciation of the criminal negligence of the government. This cannot be attributed to any type of “blockade”, especially when the entire leadership is obese and make uncountable transactions of all kinds with the oil and gold of all Venezuelans, including those children.

If to this we add the absurd deaths of children with high-risk diseases due to their inability to access bone marrow transplants, treatments that we previously conducted through the Simón Bolívar Foundation in CITGO and the PDVSA agreements with Argentina and Italy, it clearly demonstrates the absolute disdain for the lives of the weakest of a government that, simultaneously, orders to spend 50 million euros on military uniforms.

Nowadays, Venezuela is a country where its children, its future, the most beautiful element of society, die. It is a tragedy, and we denounce to the world the cruelty of the government; as we said it before, the madurismo, just like Herod, destroys the dreams of the Homeland. What would Chávez say of the tragedy the children of the homeland are experiencing?

None of this is heroic: there was no such thing as a Great Patriotic War or a war against colonialism, nor was there a fight against an invasion, nor a war of national liberation, not even an armed revolution. There is no justification for any of this.

The Chavismo delivered the madurismo a country in full motion, a strong PDVSA, with a production of 3 million barrels of oil per day, a growing economy, social programs underway; a country with gasoline, cooking gas, electricity, water, food, with a minimum monthly wage of USD $455, with labor rights, social benefits; a mobilized, dignified, proud, supportive, joyful people.

None of this is for a greater cause, on the contrary, every day they surrender the homeland, they hand over the oil, gas, the Mining Arc; they gave up the Essequibo, handing over our mining resources so the private companies, national or foreign, loot the country. The law is violated everywhere, while the environment, the indigenous, peasants, and workers’ rights are violated and destroyed.

It is inexcusable that someone who considers himself a revolutionary or Bolivarian, and much less a Chavista, whether civilian or military, supports this disaster, this tyrannical and anti-popular government. What sort of political calculation can be above the principles and ideals? What kind of economic calculation can worth more than the sovereignty of the country and the welfare of the people? How is it possible that movements or parties that call themselves revolutionaries and leftists remain silent?

The call to unity, to discipline, lead to an immediate question: the silly unity? Unity for what purpose? To continue destroying the country and surrendering the Homeland? What sort of discipline is that: the discipline of silence, of fear? Is maduro the owner of the country? Is this a monarchy where the royal family does what they please?

Is it that we do not want the extreme right to take power? We do not want to be invaded and intervened? No one wants so and we will not allow it. For that same reason, it is necessary to urgently get rid of maduro. He has weakened the Homeland so much that it has served it in a silver platter for the extreme right and foreign interests to take. The government has proven incapable of leading the country and of protecting the people. It has neither clear ideas nor the slightest notion of the magnitude of the problem we are facing, of the dangers that are haunting us, and the immense challenges that we have ahead of us in the future.

The government is not right, it has nothing worth fighting for; it does not excite anyone. It has developed, through the use of State resources, extracted in fraudulent foreign exchange operations from the Treasury of the Nation, the Ministry of Finance, and PDVSA, a network of manipulation and lies that imposes a cold silence on reality, only repeating once and again the empty excuses and slogans void of content or ideas. It is only whatever maduro says and that is it.

The madurismo has instilled fear on the country. No one speaks, no one dares. Some senior ranking officials, who, after so long, have finally decided to write timid letters of resignation to their position, have been dismissed with disdain in public acts. Others, cadres with many years of political experience, remain silent, try to be invisible, hide behind their chairs, and take refuge in their position.

This has nothing to do with a revolution that is liberating, participatory, protagonist, laborer, popular. Nothing farther from that; no one speaks, no one makes denunciations, and no one speaks out. The workers are fired and that is it, their salaries are suspended, they are taken by the Sebin or the Digcim; the peasants are killed by the new landlords, the poor in the neighborhoods are killed by the FAES or any other paramilitary group of the madurismo.

How is it possible that personalities or movements that once defended human rights say nothing of this? of the ordinary prisoners who die burned in their cell, of the oppositionist who is killed with a rocket or that who falls from a tenth floor, or even of the hundreds of prisoners-kidnapped politicians of the Chavismo and the opposition, civilian or military?

You know what? The damage caused by the madurismo to the cause of socialism is profound. The damage caused to the Chavismo and to president Chávez himself is still indeterminate, but it has certainly been a second death for the Commander. We will know for sure the next time the people can express themselves freely.

Maduro may continue buying time, negotiating, handing over the homeland, and playing in twitter, but he has strategically defeated Chávez and the revolution. The madurismo, that strange and fragile combination of characters that are not, and have never been revolutionaries or Chavistas; that diverse group of opportunists, social climbers, entrepreneurs, right-wing militaries, who resented Commander Chávez, people whom he pushed aside back in the day, people who even opposed him openly will remain in the dumpster of history for being responsible for this tragedy.

However, that moment when Commander Chávez, just as the phrase attributed to Bolívar indicates, could “… tear the darkness for an instant, shine just above the abyss…” remains in the hearts of the humble people, today outside the homeland or again buried in the catacombs. The Chavista, Bolivarian, revolutionary field must be recomposed, regrouped. It needs to return to Chávez, to the people, to socialism, without biases or excuses.

We, men and women of the people, militants of hope, of the Homeland, will continue to battle the fight for the future with all those who care about Venezuela, about these children, with those who are still capable of showing outrage in the face of injustices; those capable of thinking, above all, in the humanity and in the right to live well, to live in peace.