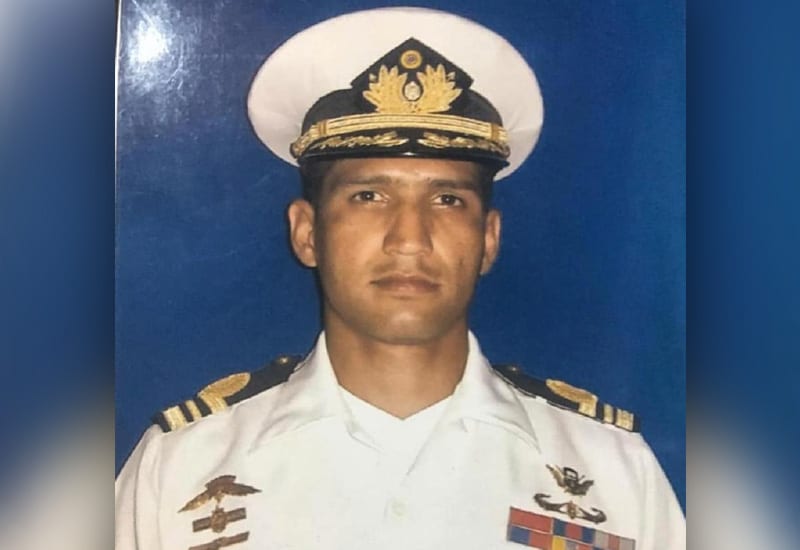 The death of the captain

While writing my weekly article, I heard the news about the death of the Navy Captain Rafael Acosta Arévalo, an appalling, despicable and very serious event that continues to plunge the Venezuelan families into mourning. I wish to express my deepest condolences to his widow, children, relatives, and friends.

Although I did not know the Captain, it was evident, based on his rank and photograph, that he was a young man with a positive attitude, typical of an officer of the Bolivarian National Armed Forces. A Venezuelan, whose human rights were infringed, violated, right from the moment of his arrest, as his wife denounced on June 22 through social networks.

His arrest took place the same day the UN High Commissioner for Human Rights, Michelle Bachelet, finished her visit to the country, after declaring that she had received the government’s commitment to “allow carrying out an evaluation of the National Commission on Torture Prevention and the access to UN special rapporteurs to the country.

His death took place after being exposed and condemned last June 27, by the minister of disinformation and maduro’s hate shows, for his involvement in the most recent “conspiracy” unveiled by the government in the customary political raids. This “super minister” of the madurismo will go down in history as the announcer of death; such are the strange twists and turns of life.

José Vicente Rangel and Prosecutor Luisa Ortega Díaz, or other voices, must have to document and write other chapters of their respective “Black File” and “Final Report of the Violation of Human Rights in the country between 1958 and 1998” which document the violence during the fourth Republic, to now include the violence of the madurismo. It is the same pattern, the same methods. There is NO such thing as good tortured and bad tortured, mainly if the idea was to develop a revolution, not only political, economic, and social, but, and very especially, spiritual.

What we know as madurismo has nothing revolutionary or Chavista in its nature. It is cruel, violent; it does not excite anyone. It is the second death of Commander Chávez. He did not lose his life for this; this is not what we fought so hard to accomplish, the reason behind the mobilization of the Venezuelan people rallying behind the flags and speech of the Bolivarian Revolution.

This is nothing but a violent, intolerant police State which seeks to impose by force an outdated, capitalist dependent, unfeasible model; and it will do anything it takes to remain in power.

The Captain’s death and the circumstances, still unclear, that surrounded this tragedy: his appearance before the Court Martial in a wheelchair because he was unable to stand; his call for help in a low voice; his urgent transfer to the hospital and subsequent death in the early morning, clearly demonstrate the brutality of the repressive apparatus of the government and the high level of commitment and responsibility of the senior hierarchy of the madurismo in these human rights violations.

Similar events happened in the Fourth Republic, when the political prisoners died victims of torture, beatings, kicks, in the hands of their captors.

Just as tragic were the circumstances of the execution of Oscar Pérez and his group, which he transmitted himself through social media, including his call for a public prosecutor who never showed up; the decision to kill them was already made.

The same thing happened in the fourth Republic, the Digepol or Dim arrived at a place and surrounded the guerrilla or group of guerrillas, not with the intention of apprehending them, but of killing them, executing them, as they did in so many cases.

The circumstances of the death of former minister Nelson Martínez were tragic and cruel, as it was denounced by his wife and children in an open letter that should shake the consciousness of the entire country.

So many officers and revolutionary leaders died in this way, back then in the violent sixties. It is worth remembering the case of Captain Manuel Ponte Rodríguez, who died in 1963 while held captive in the San Carlos Barracks, after his captors repeatedly deny him, despite the requests of wife and the defense, vital medical assistance to save his life.

We have systematically denounced it over and over again: the human rights violations in the country cannot be attributed to an “excess” of one or another officer who is then brought to justice. No, it is increasingly clear that human rights violations in the country are part of a state policy imposed by Nicolás maduro, where all powers are involved: the Executive, the public prosecutor, the judiciary.

A policy rooted in the government, directed and decided from the presidency by maduro himself, along with the group of five that has all the power of the country, the open and brutal repression against any opposing political factor whether they are part of the traditional opposition or the Chavismo.

What the madurismo has decided to do is to impose itself by violent means of those that are wrong: containing the discontent and deterioration, imposing fear, breaking the law, persecuting, imprisoning, and killing. It has done so systematically, by sectors, with different degrees of intensity. It has used lies, manipulation, the indifference imposed by fear, and those that bury their heads on the ground.

It was first the oil workers, then the protesters on the Street, the opposition political leaders, the Chavismo, and now, in a particularly cruel way, the military.

I have published and handed the Office of the High Commissioner for Human Rights a list with over one hundred PDVSA workers who are imprisoned or political kidnapped in the Dgcim, Sebin, and El Helicoide. I have asked for respect for their most basic human rights, as well as my own, such as the right to defense, to due process.

I have delivered the letters of the relatives of the kidnapped workers to the Office of the High Commissioner, where they describe, for themselves, the conditions of mistreatment and violence to which they are subjected. Cases of those who have been imprisoned for more than five years without even an appearance before court, without knowing what are the charges against them, those who have tried to commit suicide, those who are among ordinary prisoners, those who are in military camps, those who are sick; the cases that show the cruelty with which these Venezuelans have been mistreated.

But it turns out that, since they are Chavista workers since we are Chavistas persecuted by the government, we do not matter for the other side of the intolerance.

I have denounced the case of former minister General Rodríguez Torres, former Minister Raúl Isaías Baduel, of Rocío Ramírez, where are they? I have also denounced the cases of more than 154 officers detained, political hostages, such as the cases of the Lieutenant Colonel Igbert Marín Chaparro, Colonel Ovidio Carrasco, General Balza Liota, Major General Alejandro Pérez Gámez, among others. They are torturing our officers, those of the Bolivarian National Armed Forces.

But, once again, it turns out that since these military officers are part of the Bolivarian sphere, with key participation alongside the people and the Constitution, Chavista men and young people that have confronted the madurismo; thus, they matter even less for the other side of intolerance. They use them, they want them supporting their adventures regardless of their fate.

Since 2014 and 2017 about 200 Venezuelans lost their lives on the streets, as a result of the political violence: oppositionists, Chavistas, police officers, and many innocent people. But nothing happened. Those deaths were negotiated between the government and the opposition.

The Commission of “Truth, Justice, and Peace” was created by the experts of cynicism so that nothing happened, to hide everything, to manipulate the victims. I can clearly recall my conversation with a humble man, father of a hard-working boy, beheaded by the “guayas”(steel cables) that the fascism installed in the streets of Caracas against motorcyclists. I remember his impotence in the face of the negotiations of the government and the opposition. Nothing happened. They deceived the relatives of the victims. Impunity was imposed as a rule of the “victor builder”.

What is incredible about this situation is that, for the staunchest defenders of the madurismo, including TV hosts and some PSUV leaders, violence against those that oppose maduro, whether oppositionists or Chavistas, is justified. There is always a reason, an excuse, an unveiled conspiracy, an imminent danger. They do not realize what has happened to them; they have lost every revolutionary, Bolivarian trait. At some point, even Commander Chávez will appear to be involved in one of these conspiracies of the madurismo.

In any normal country, the prosecutor and those responsible for the security agencies would be removed and brought to justice, some ministers would resign on ethical grounds, and the people would take the streets demanding maduro’s resignation. But nothing happens. Such is the life in maduro’s Venezuela, the country of fear.

The thing is that the ordinary citizen, the laborer, the worker, the youth, the professional, the student, the popular leader, the housewife, the PSUV militant, the peasant, the retiree, the elder, has his head buried on the ground, where, of course, it is impossible to breathe, to speak, to see, much less to think. Such asphyxiation keeps the citizen, the victim, in a permanent state of fear and anguish.

But it is now time to overcome this climate of fear and apathy. There is enough compelling evidence to say that this is a tyrannical, despotic, government, outside the law, behind the backs of its people. It is Herod against the work of president Chávez.

It is now time for our citizens to understand that this government has not only hijacked the dreams of the entire country, the sovereignty of the people over their own affairs, but it is willing to sacrifice an entire nation, its institutions, its men and women, its military youth, our workers and captains, to remain in power and maintain its privileges.

It is now time that they understand, particularly our military, that despite the asphyxiation, indignation, and anguish, it is not behind the coup adventures of the sellout, antinational extreme right that we will get rid of maduro. On the contrary, the extreme right is the perfect excuse for maduro to remain in power.

It is only alongside the people, returning to our Bolivarian, revolutionary nature, to our Constitution and our laws, returning to Chávez, to the participatory and protagonist democracy, and with the help of Patriotic Junta, that the civil-military unity, just like that April 13, 2002, will be able to restore the Constitution and put an end to the violence of both intolerant groups contending for powers against the interests of the whole country.

Our country needs, our people deserve, a demonstration of greatness, raise their gaze, overcome fear and blackmail. We need the efforts of our best citizens, men and women who, in the midst of sadness and despair, can remember “I am the master of my destiny; I am the captain of my soul“.