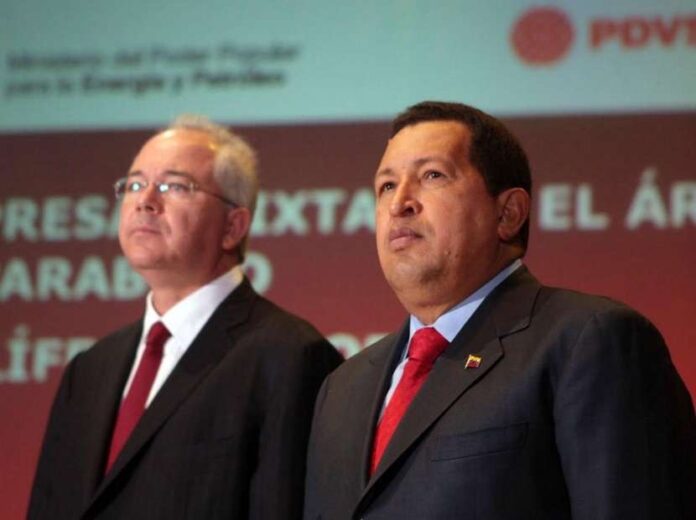 THE LICENSE TO CHEVRON AND THE COUNTRY UNDER TUTELAGE

Immediately after the dialogue between the government and the opposition resumed in Mexico on November 26, it was announced with «great fanfare» that the authorities of the US Treasury Office issued the long-awaited license to Chevron Corporation, authorizing it to operate again in Venezuela, but doing so under conditions that violate the laws and the Constitution of the country. The maduro government euphorically celebrates the news, while the opposition nods in silence, pretending to be «crazy».

As I have previously pointed out, at that «negotiating» table in Mexico, such dialogue among elites is nothing but the interests of the political and economic factors that are part of the new coexistence pact: politicians with long faces, with a violent past, maneuvering parliamentarians, who are used to striking deals and tricking others; businessmen and economic operators, representatives of the oil transnationals, bondholders; in short, there is everything, but the Venezuelan people.

More than a negotiation, Mexico is the formal beginning of a process of Co-Government between factors of the opposition and the Madurismo, who reach agreements –behind the backs of the country- on issues that nobody knows about, surprises that are popping out like rabbits from a magician’s hat, where it will always be what the illusionist wants it to be.

This license granted by a foreign government to the transnational to resume operations in the country, dictating the guidelines on how, according to them, the Venezuelan people’s oil will be exploited, constitutes a flagrant violation of the legal framework in force in Venezuela for the hydrocarbons sector, including the Constitution itself.

The problem is not what the U.S. authorities allow Chevron to do; they can decide whatever they want for the benefit of their transnational corporation, what is VERY SERIOUS is that the Venezuelan government assumes this License as a new Hydrocarbons Law, throwing away one of our most precious national conquests: the sovereign management of oil.

We are in the midst of an illegal and absurd situation, where the Maduro government accepts that a License issued by a foreign government is above the laws and the Constitution of the country, dictating guidelines on how to handle matters regulated by our national laws.

In other words, the Maduro government renounces the exercise of sovereignty over the national territory, the ownership and exploitation of the natural resources of Venezuelans: oil and gas, turning Venezuela into a COUNTRY UNDER FOREIGN ADMINISTRATION.

The Chevron License establishes that the North American company will be able to PRODUCE AND EXPORT Venezuelan oil DIRECTLY, WITHOUT PAYING ROYALTIES OR TAXES to the Venezuelan State, as well as DIVIDENDS to PDVSA, as majority partner of the Joint Ventures in which Chevron participates, always as a minority company, in accordance with the Organic Law of Hydrocarbons. These terms are illegal and unacceptable.

But since the government remains silent, while the Minister of Oil welcomes the head of Chevron in the country with a red carpet, and the «experts» of the opposition try to gild the pill; it is necessary that the people and the political and social sectors, above all, the workers, open a national discussion on this aspect, which is an unequivocal sign of the government’s decision to hand over -now openly- the oil of all Venezuelans, taking our country back to the times of the dictator Juan Vicente Gómez, dismantling our entire oil doctrine.

Let’s see what the license establishes in its different sections, which we will mark in parentheses, and how it violates our laws:

What aspects does the Chevron License establish that VIOLATE the Organic Law of Hydrocarbons and the Constitution?

Thus, the fact that the Venezuelan State is the OWNER of the oil is being ignored, and that, as a sovereign country, it establishes (as it has done in the laws of the Republic) the rates of Royalties and Taxes.

The aforementioned is a DUTY of the State. It cannot choose, it is obliged to comply with its authority, one of which is taxation. When the government foregoes taxes, it is violating the country’s Fiscal Sovereignty and, therefore, the Constitution and the Law.

Oil, and therefore its revenues (royalties, taxes, and dividends), are, in accordance with the provisions of Article 302 of the Constitution, property of the public domain, and thus inalienable, imprescriptible, and unseizable.

Therefore, the Venezuelan State, and the National Executive power, in particular, IS OBLIGATED to exercise TITULARITY over oil, which, as stated in the Organic Hydrocarbons Law, is a FULL OWNERSHIP, which implies the right and the duty to exercise through the principle of sovereignty, all the powers inherent thereto, that is, the use, enjoyment, and disposition of the natural resource.

Articles 44 and 48 of the Organic Hydrocarbons Law establishes the amount of the Royalty and Extraction Tax at 33.33% of the value of the barrel of oil sold, i.e., it is the direct participation of the State as the owner of the natural resource, in this case of the oil. For every 100 barrels sold (regardless of who produces it in the country), 33.33 barrels belong to the Venezuelan people.

VENEZUELAN OIL CANNOT BE SOLD WITHOUT PAYING ROYALTIES TO THE STATE.

When some «lobbyists» and «experts» argue that «Chevron has never paid royalties», they ARE LYING. Chevron, or any operator producing oil in the country -including PDVSA-, has always paid royalties to the State, that is, to all Venezuelans.

Once again, there is a violation, this time, specifically, of the FISCAL SOVEREIGNTY, which is exercised through the State’s Taxing Power, which, to the detriment of Venezuelans, the government is expressly foregoing.

The majority shareholding and effective control of PDVSA in the entire oil production and export process is established as a fundamental condition in the Joint Ventures. In this way, the parties comply with Article 302 of the Constitution, which reserves the control of the State over the primary activities of the oil industry.

The License is ignoring the fact that Chevron or any other private oil company can operate in the country ONLY through the figure of Joint Ventures, with minority participation, as established in the Constitution and the Organic Law of Hydrocarbons.

Therefore, in the text of the License, there is no mention anywhere of the figure of a Joint Venture, but rather of Chevron’s «Joint Ventures (JV’s)» in Venezuela. The entire legal structure, as well as the terms and conditions of the figure established in our law to carry out the primary oil activities (oil exploration and production) that is to say, the Joint Venture, is completely disregarded.

Chevron CANNOT operate on its own, but together with PDVSA, through the Joint Venture; consequently, the profits or dividends it generates must be distributed in proportion to the participation of each company in the Joint Venture, as well as the payments corresponding to royalties and taxes to the Venezuelan State. Otherwise, the Joint Venture would be stripped of its value and content.

Dividends are an expression of the right of ownership over the natural resources and of its condition as a public good, which is received by the national company that manages it and constitutes a source of retribution to PDVSA’s sole shareholder, i.e., the Venezuelan State.

This is a matter of sovereignty and was a conquest of the country and the rest of the OPEC countries, in the so-called «OPEC revolution» of the 1970s, which allowed us to influence the price of oil in the international market, putting an end to the cartelization of the oil transnationals.

Venezuela, a country under foreign administration

What all Venezuelans must be clear about, despite the insults, offenses, shoddy puppets, and secret pacts among elites, is that:

What is happening with Maduro in the country is what happened at the beginning of the last century during the dictatorship of Juan Vicente Gómez. The dictator surrendered the Venezuelan people’s oil to the plundering of transnational corporations in exchange for political support to remain in power and satisfy his group’s interests, imposing an extractivist and capitalist model, marked by the plundering of the country’s wealth.

In light of such a serious situation, there is a complicit silence on the part of the political leadership of Chavismo and a minion attitude in the factions at the head of the government, while the opposition remains silent and allows the government and the transnationals to do as they please.

While Maduro and his spokespersons try to hide or justify the surrendering of the oil, others look very bad, when, in their hate programs they boasted, arrogantly, warning the transnationals that to take the oil «they had to pay». The Minister-Police -amid his thunderous failure- meets with «mister danger», while he continues attacking and dismantling the oil policy of Commander Chávez, the Full Oil Sovereignty.

Others, «experts» and «analysts», always ready to virulently criticize Chávez and our Full Oil Sovereignty policy, express their joy that «at least» the transnational will make some contracts and purchases in the country, ignoring that, while they take our oil and plunder our resources, Venezuela will have NOTHING in exchange.

Chevron, the second most important North American transnational, with profits so far this year over $29 billion, will take all the oil it can, without paying for it, if it gets a government -like this one- that allows it to do so. To this end, they have lobbied and carried out a costly campaign to convince many political sectors of this «miracle», but this does not surprise anyone, it is their nature.

This has always been the case and that is why oil-producing countries, and Venezuela in particular, have had a sovereign oil doctrine and policy, with their own capacities and an oil fiscal regime, which has allowed us, at least until the government of President Chávez, to conduct our own affairs and put oil at the service of the people.

The issue that should occupy Venezuelans, as the crisis worsens and «we are in over our heads», is whether we will allow or keep silent, while a government adrift, is willing to hand over everything -including oil- to stay in power and maintain its privileges, dismantling the institutionality, the laws and the Constitutional framework of the Republic.

A simple license from a foreign government makes a government that has been surrendered for a long time, that is not capable – and has not been capable- of defending the collective interests of the Venezuelan people, our sovereignty, nor the management of our oil, falter, surrendering the country to the plundering of its resources and our future. This is the essence of the Madurista «miracle».

Chavismo is not a franchise, nor can it be turned into a grotesque puppet; Chavismo is revolutionary thought and action, altruism, and an elevated human condition, it is socialism, it is Full Oil Sovereignty, the Missions, the Plan of the Homeland, the Living Well of the people, not this disaster.

We, those of us who worked alongside President Chavez for more than 12 years, in such difficult times, making revolution from the government, must take charge, as we do, of the defense of his policies, his work, and his postulates.

Despite the lynching and persecution, including the unfortunate and disproportionate expressions of hatred, we owe it to the people; I stand, as I have always done, by the side of the most sacred interests of the Homeland and ALL Venezuelans.

NO TO THE PRIVATIZATION OF OIL