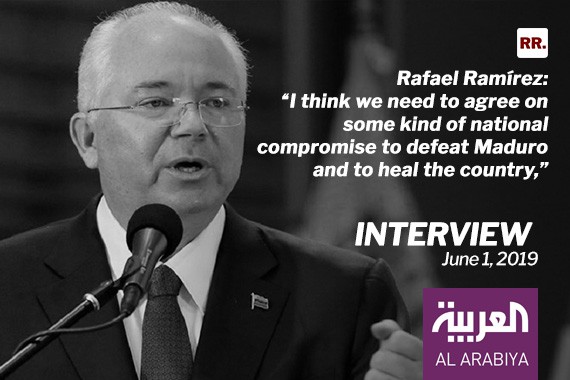 Venezuela’s former oil minister says that a national movement that includes all elements of Venezuelan political society can bring about the peaceful downfall of Nicolás Maduro and lead to the economic revival of a country that boasts the world’s largest oil reserves.

Queues that stretch for miles and delays of 24 hours or more at gas stations are the latest burdens to hit crisis-torn Venezuela, which economists say is witnessing the worst ever economic collapse outside of a war in at least 45 years, despite having the world’s largest proven oil reserves.

Nearly four million citizens have fled the country in desperation as Maduro’s regime clings to power in Caracas, despite the efforts of Venezuelan opposition leader and acting president Juan Guaidó, who has the backing of the US and dozens of other countries.

An attempted coup by Guaidó on April 30 failed to break the impasse when Venezuelan army officers chose not to move against Maduro despite allegedly having made promises to do so.

Beyond a small coterie of comrades, Maduro is universally unpopular among Venezuelans. But he remains in power because of the support of countries like Russia, Cuba, and Iran and because a significant demographic in Venezuela, including the military and the “Chavistas” – the name given to followers of former president Hugo Chávez – either fear the alternative or are economically hostage to the Maduro regime.

“Maduro has surrounded himself with some elites, in the economic, political, and security sectors,” says Rafael Ramirez, who once headed Venezuela’s immensely powerful state-owned oil company PDVSA.

Ramirez previously served as Venezuela’s Minister of Energy and as the Permanent Representative of Venezuela to the UN.

“These people exercise their power against the people and they have international support from Russia, Cuba, and other countries like Iran … They are still in control of the intelligence and military sectors,” he says.

A close confidante of Chávez, Ramirez ran PDVSA from 2004 until 2014 during which time it was ranked the fifth largest oil exporter in the world, producing oil at a rate of almost three million barrels a day.

But Ramirez fell out of favor with the incoming regime of Maduro following Chávez’s death. He was “demoted” briefly to foreign minister, then dispatched to New York to represent Venezuela at the UN, before resigning in December 2017 as a result of worsening relations with Maduro.

Hyperinflation stood at 1.3 million percent per year up to November 2018, and the International Monetary Fund (IMF) predicts that this year it will hit a staggering 10 million percent.

Venezuela is crippled with power cuts and shortages in food and medicine. Venezuelans call the endemic malnutrition in the country the “Maduro diet.”

The New York Times recently cited IMF economists as saying that to find equivalent examples of economic collapse, one had to look at countries at war, such as Lebanon in the 1970s or, more recently, Libya.

“Anyone, Chavista or Opposition, who opposes the Maduro regime, runs the risk of persecution, exile, kidnapping, imprisonment, and even murder,” Ramirez says.

“People live in a state of fear and hopelessness under a governing political gang that refuses to enable a political solution to the very serious crisis facing our country. They have led our homeland into a deep abyss.”

Still, there is a way to end the impasse, Ramirez says, one that he hopes will bring about a peaceful transition of power, revive the economy, and allow Venezuela to take its place among the community of nations.

“The way to resolve the political situation is to ask for a huge national movement that includes the military, the opposition, the Chavistas in order to confront and defeat Maduro,” he says.

“I think we need to agree on some kind of national compromise to defeat Maduro and to heal the country.”

Ramirez recommends the creation of an executive committee, similar to the civil-military movement that helped steer the country following the removal of Venezuelan dictator Marcos Perez Jimenez in 1958.

This executive committee would include technocrats who can handle the economy, along with all key political and security elements in Venezuela.

A proposal for such a committee, he believes, would win over the “silent majority” of the military and the Chavistas who remain unconvinced that Guaidó alone has the necessary clout to bring about an orderly transition of power.

Ramirez currently lives in exile but is in contact on a daily basis with the opposition, the military, and the Chavistas. He has great influence with the latter because of the close relationship he had with Hugo Chávez.

“It requires strategic vision, political stature, greatness, for us to come out of this crisis,” he says. “We need to put aside the hatred, selfishness, pettiness and return to politics and the rule of law so we can give back to the people their sovereignty and power to conduct their own destiny and rebuild our homeland.”

Russia, China, Cuba, Turkey, and Iran all have extensive economic interests, and in some cases political and security interests, in Venezuela.

But, Ramirez says, it is essential that Venezuela regains its full independence and sovereignty and deals with other nations on a basis of mutual respect and equality, including its neighbors in the Americas.

“I believe we have to be able to agree with some countries to respect our sovereignty and respect our law. The interference of all [foreign] interests in our country is unacceptable. We need to remove the foreign factors within our institutions and put everything in the right place.”

The Lebanese Iran-backed party Hezbollah has a security and commercial presence in Venezuela, despite denials from its leadership. But Ramirez insists that a post-Maduro Venezuela will have no room for any foreign armed groups.

“We are not going to allow any group that acts against the law or supports terrorism,” he says. “Anything related to security and defense will be under the control of the national army while law and order will be left to the police in accordance with the law and constitution.”

The same applies to drug trafficking, he says. Venezuela is a major conduit for the trafficking of cocaine from neighboring Colombia to the US, Europe, the Middle East, and Africa.

“We need to reestablish cooperation with all the international bodies, including our neighbors – Colombia, Mexico, the US, Brazil – to help us fight to defeat this terrible crime against the people,” he says.

Part of this post-Maduro process would also see the restoration of full diplomatic, political, and commercial ties with the US, which have become increasingly strained and hostile under Maduro.

“Our relations with the US have never been worse,” Ramirez says. “I believe that we will be able to agree with the US [on] a respect for our constitution and full respect for our common interests, which include the development of our region and regional peace, and conduct our business in oil and trade. We want normal, healthy, and good relations and to depoliticize the current relationship with the US.”