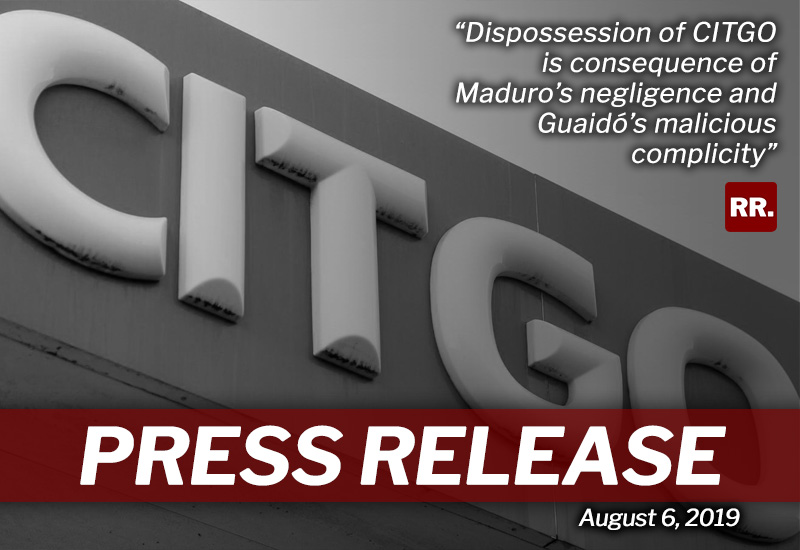 Ramírez recalls that he warned about the current situation with the PDVSA subsidiary in the United States back in 2014, but maduro did not make a timely decision to save the resources; the “Chavismo without Chávez” inside the oil industry opposed the sale of the refining holding despite the losses it has caused the country and to be located in a foreign territory with a hostile government.

Caracas, 06 August 2019.- To former minister of oil and former president of Pdvsa, Rafael Ramírez, CITGO was always hostage of the oil opening and a bad business deal for Venezuela; one which the country should have ended in 2014 when there were offers of up to 15 billion dollars. Nothing was done at the time and now, due to the negligence of maduro’s government and the network of anti-national interests that surround Guaidó, these assets in foreign territory can be definitely lost as a result of an illegal dispossession for which both political sectors are responsible

“What is happening today is, unfortunately, the confirmation of the scenarios we warned maduro about back in 2014: a foreign government, driven by political motivations, seizes assets of the Venezuelan State. Assets and resources that maduro, as Head of State, did not know how to defend because of his negligence and lack of courage in defense of the interests of the county”

Regarding guaidó’s stance concerning CITGO, he considers it to be illegal and deceptive. He affirms that “regardless of what it is said, or the position regarding maduro, one cannot participate in the confiscation of the assets of the Venezuelan State by a foreign government. Much less can one appoint an executive board to manage the State assets, those that belong to all Venezuelans, without any legal basis, accountability or monitoring of any of the bodies established by Venezuelan laws”

Ramírez believes that what is happening with CITGO is a loss for the country that could have been avoided. It was precisely as part of his former duties as vice-president of the economic area in 2014 that he proposed maduro to sell the entirety of the assets of the refinery as a way to collect resources that would provide funding to the Republic to face the imminent crisis.

Nowadays, the Full Oil Sovereignty of the country is being threatened by transnational interests that have regained control of the sector by the doing of maduro’s administration and that count on the opposition’s promise of handing over our strategic sectors. CITGO is another one of those assets that the greed of those interests seeks to control.

Ramírez insists that the mobilization of the people, the progressive civil and military sectors, is essential to ensure a political transition that preserves the economic and territorial integrity, as well as the political independence, of the country.

“It is only with Civic-Military Patriotic Government Junta, constituted by nationalist and progressive sectors, rooted in the highest interests of the country, that we will be able to stop this disaster, of which the dispossession of CITGO is one more unfortunate episode”, says Ramírez.

In his most recent article entitled “CITGO, a disaster foretold”, Ramírez recalled the dark history of the refining circuit, a set of assets in the United States that were not necessary for Venezuela to place its oil in said market, but what that acquisition sought was to take PDVSA assets away from the control of the State; it was “the jewel of the crown of the anti-national vision of the “oil opening”, he explains.

The Chavista political leader insists that the acquisition of CITGO demanded investments of billions of dollars abroad, in addition to discounts on the selling prices of our oil to make such business deal viable. All this happened while the country was suffering the consequences of the economic crisis brought by the “Black Friday”.

CITGO never paid enough dividends to the country to justify such investment, it essentially did not refine Venezuelan crude oil, on the contrary, it brought burdensome costs for the purchase of oil and foreign products to supply the refineries.

Ramírez points out that CITGO’s losses were one of the secrets of the “black box” of the old PDVSA; but after the defeat of the Oil Sabotage, this started to change.

“Later on, with the new PDVSA that had access and control of the operations, we were able to accurately determine some of the true purposes of the acquisition of CITGO: first, to hide and transfer corporate costs to Venezuela so to avoid paying taxes in the country, where they were higher; second, to have PDVSA assets out of the control and jurisdiction of the State and the Venezuelan laws; third, CITGO was a hostage of the “oil opening” because, by acquiring assets in the US, PDVSA ensured investors that should any dispute arise with the Venezuelan State, they would always be able to “cash” or “recover” their investment with CITGO assets.” He said.

Although Commander Chávez knew and supported the strategy to dismantle the disastrous “oil opening”, there was always opposition to sell CITGO, both from the Foreign Ministry and from the sectors of the Vice-presidency of Refining and that of Commerce and Supply of PDVSA, as well as from CITGO itself, who wielded an alleged “strategic convenience” of having this company’s presence in the United States, besides the national interest of having access and control a company outside of the national territory,

Despite the strong internal opposition posed by these sectors, we managed to sell the Ruhr Oel refining circuit in Germany and three CITGO refineries, in addition to getting rid of terminals and refineries. This allowed us to return those resources to the Venezuelan State and reduce the costs of buying oil and products abroad.

Even so, there were three refineries, which constitute the bulk of the assets affected by the confiscation of CITGO in the United States.

“We had priorities”, Ramírez asserts:

As of 2004, Ramírez, who already been appointed minister and president of PDVSA, created a team with extensive experience and political and professional qualifications to dismantle the anti-national strategy “oil opening” and achieve the “Full Oil Sovereignty”.

As part of our offensive strategy, we had priorities: “ensuring fiscal and oil contributions to the State; defending prices before OPEC; reestablishing the production to 3.3 millions of barrels of oil per day; controlling operations, exports, and domestic market of gasoline, diesel and gas; migrating the Operating Agreements to Joint Ventures; we reestablished the value of royalties and other oil taxes; regulated the sale and control prices of oil; eliminated discounts; joined the fight against poverty and exclusion and boosted the Social Missions; nationalized the Orinoco Oil Belt and certified the reserves of 316,000 millions of barrels of oil, the highest in the world. We took control of the offshore gas, faced international arbitrations, and began to reverse the internationalization policy.” recalls the officer in a concise summary of such complex task.