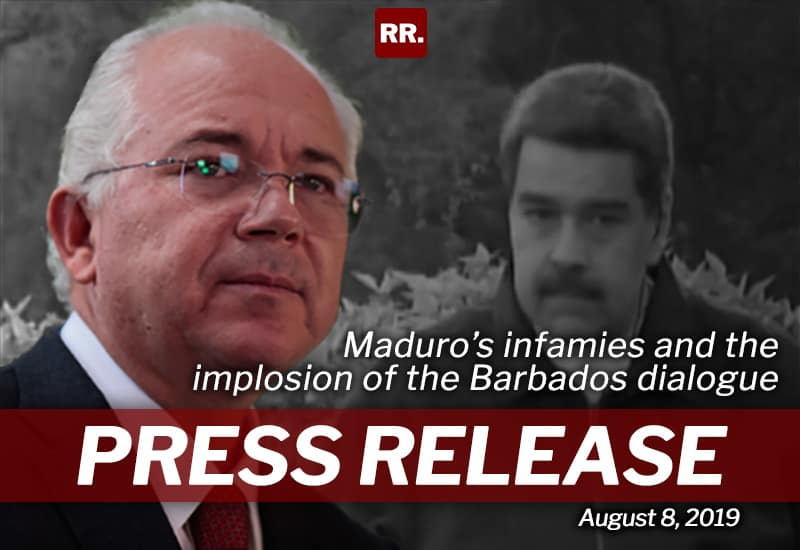 In light of the recent declarations of president maduro against me (See Video), however irrelevant they may seem in the current political climate, I have been forced once again to ratify my status as political persecuted of the madurismo and to denounce that the reiterated series of infamies blurted out by maduro and his power circle against me, threaten my personal safety and that of my family.

Maduro insists on making accusations that are not only absurd but also stupid, saying that I live “in a palace in Italy”, while intending to show that there is due process against those who have been accused-sentenced by him, by resorting to illegal activities which have brought death to so many Venezuelans.

On the PDVSA disaster, maduro insists on justifying it any way he can, except by recognizing his inability and incapacity to lead the oil industry; hiding behind his incompetence, he makes evident his deliberate intention to privatize it in favor of his corrupt surroundings, thus he accuses our workers of precisely the convenient corruption he says to have unveiled.

Maduro well knows that neither he nor his most intimate circle will be able to set foot outside the national territory because they will face all sort of trials in response to their criminal actions and corrupt activities.

Maduro, without presenting any evidence, reiterates all sort of lies against me that practically constitute a death sentence, given the context of the grave human rights violations, coopting of justice, lack of independence of powers, and high levels of repression, with special cruelty against the Chavistas that, like me, oppose his misgovernment, as it has been demonstrated by the UN High Commissioner for Human Rights, former President Michelle Bachelet, in her last report.

In Venezuela, Justice is the main victim of the destruction of the Constitution and the Rule of Law promoted by the madurismo. The Prosecutor’s Office has become an executing authority of political revenge at the service of maduro and the power factors of the country. In this context, I repeat, the a priori sentence issued by the head of State against me, which has been expressed in reiterated occasions, violates my right to presumption of innocence, my right to honor and reputation, my right to defense, all of this amounting to a death sentence.

Nowadays, maduro, emboldened by the control he has overall the country’s institutions, behaves as he pleases: he lies, accuses, persecutes, and imprisons whoever he considers an enemy, to those of us who denounce his disastrous government or dispute him the power.

The only thing left to do for the Bolivarian Revolution is to get rid of nicolás maduro, reestablish the Constitution and free our country from so much brutality and oppression, from the worst government in our history.

Although what maduro says is irrelevant, with little or no credibility whatsoever, the obsession of a character who is leading our country in a dictatorial way and who has demonstrated not to have any kind of scruples or respect for laws is rather concerning. I hold nicolás maduro responsible for anything that could happen to me and my family, as we are targets of his irrational hatred.

Once again, I categorically reject all falsehoods of which I have been accused by maduro’s government. I reiterate that a State such as the madurista does not guarantee a fair trial to submit my pleadings before the country’s courts. Such reiterated and permanent attacks of the maduristas power factors against me ratify my condition of politically persecuted by those who hold power in Venezuela.

On the implosion of the dialogue in Barbados

A dialogue led by elites, behind the backs of the country, is not tenable. To the madurismo, the recent economic measures against the country give them the perfect excuse to kick the table. Seeing maduro that he was going to be included as part of the negotiations, with the support of the FANB that favor an agreement that led to an electoral solution, he used the last squeeze of the sanctions to try to rearrange balance in his favor and cling to power.

On the other hand, the opposition does not know well who is leading the process, committed as they are to the ultimate power represented by the United States. Their vulnerability in the negotiating table was clear from the beginning.

The madurismo and the extreme right continue to hinder any constitutional and sovereign solution to the worst political and economic crisis of the country. No one has summoned the people, in whom the sovereignty of the country resides, and, however, is the great absent from this process.

My cal is, once again, to constitute a Patriotic Government Junta to restore the Constitution and advance the conditions that allow the return of popular sovereignty to the steering of the destinies of Venezuela.

For interviews or inquiries to further this statement, contact prensa@rojorojito.org or link our Press Room.