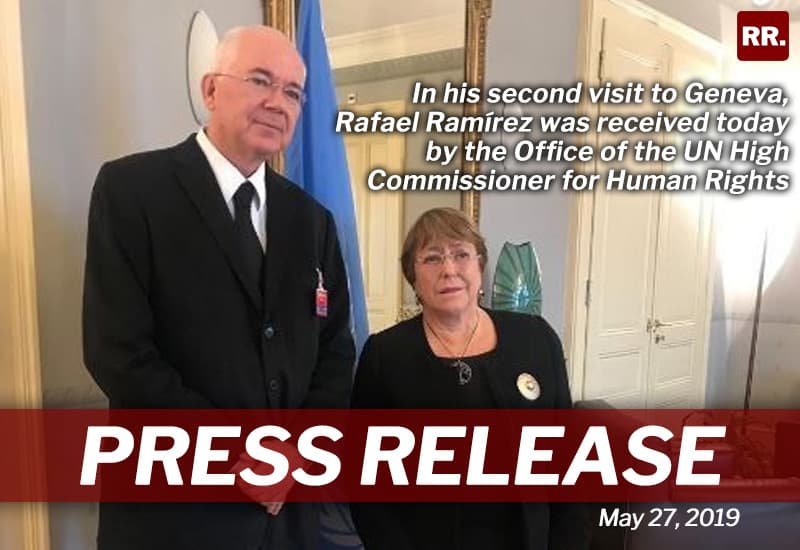 In his second visit to Geneva, Rafael Ramírez was received today by the Office of the UN High Commissioner for Human Rights

** Ramírez seeks with this visit to draw the attention and support of the international community, especially the United Nations, to demand the Venezuelan government to respect the human rights and all the international agreements entered by the country in this matter.

** Ramírez considers unacceptable the massive human rights violations in the country; therefore he believes this issue must be an essential part of any political dialogue with international mediation.

** Ramírez delivered to the Office of the High Commissioner the list of imprisoned oil workers, as well as letters from their relatives denouncing their situation. It is urgent that all cases be known and investigated independently and fairly.

Geneva, May 27, 2019.-  Former Minister of Oil, Rafael Ramírez, met on Monday with the team of the UN High Commissioner for Human Rights, Michelle Bachelet, who is handling the case of Venezuela, with the purpose of following up on his denunciations regarding the political persecution and human rights violations carried out by the government of Nicolás Maduro and delivering a series of letters  from the relatives of the kidnapped oil workers, as well as expanding the list of victims that he had previously given to the international official.

“We have insisted before the High Commissioner on the urgent need to take measures to stop the unleashed political persecution, exercised, even in a violent manner, against leaders, former ministers, workers, especially oil workers, and military officers and personnel, whose only crime is to be against the disaster that the madurismo has caused in our homeland” said Ramírez.

The political leader explained that he presented Bachelet’s team with letters that he received from the relatives of over one hundred oil workers detained and kidnapped by the Venezuelan government, in which the violations and assaults against those arrested have been documented.

Among the most emblematic denunciations,  Ramírez mentioned the cases of Nelson Martínez, Eulogio Del Pino, Jesús Luongo, Pedro León, Orlando Chacín, Pavel Rodríguez, and other hundred oil workers, as well as the case of the Major General Manuel Rodríguez Torres among other Bolivarian military officers kidnapped by Maduro. He also made special mention of the case of the detention-disappearance of Rocío Ramírez, who has been subjected to mistreatment and abuses of all kinds by her captors.

Last January, the Chavista leader held a meeting with the former president of Chile, in which he made a detailed denunciation of the persecution carried out by the government of Nicolás Maduro against him, and delivered a first list of almost one hundred cases of civilians and military, especially Chavistas, that have even been persecuted and tortured with more cruelty than other opposition figures, stressed the former minister of the government of President Hugo Chávez.

The cases denounced by Ramírez before Commissioner Bachelet are particularly serious because these are victims that “nobody mentions, they have become invisible; these prisoners have been waiting for a trial for years and the courts that judge them completely disregard their rights. Many of them have not received medical assistance, they are isolated and incommunicado and their families have been persecuted and threatened, to the point that their homes have been raided and occupied”, said the political leader from the exile.

Ramírez has been developing, in all the media and political avenues to which he has access, a continuous campaign to denounce the cases of human rights violations of several hundred Venezuelans, including former oil workers, officers of the National Armed Forces, revolutionary activists, and grassroots social leaders, who are persecuted for their ideas.

He denounces that the persecution against him is intensifying

“I myself have been the object of an infamous and unfettered persecution that seeks my moral lynching, my personal, political, and familial destruction, without any sort of evidence. The most recent thing they invented was the lie that I was supposedly connected to the 30 April coup carried out by the right; an utter absurdity. I have to live away from my country, in the exile, in a constant state of alert, because of the threats and attacks of Maduro himself and his Prosecutor, who have decided to imprison me and kidnap me to silence my voice of denunciation and fight against the process of destruction and delivery that our homeland is suffering in the hands of the madurismo,” affirmed the former minister.

At the same time, former Chávez minister reported the climate of intolerance and the violence of the extreme right political leaders, who attack and persecute him for his clear position in defense of the Constitution and against a military intervention in the country.

Rafael Ramírez remains in contact with “governments and key members of the international community, such as the UN High Commissioner Michelle Bachelet”, to denounce the climate of ignorance of the most basic rights in which all Venezuelans currently live.

Ramírez considers a priority that the human right issue be part of the political dialogue intended to be held in Venezuela with international mediation; therefore it is paramount that every case is known and investigated in an independent and fair manner.

The human rights move the world

After his meeting with Michelle Bachelet’s team, Rafael Ramírez stamped his signature and wrote “Rafael Ramírez for Venezuela!” on the board where famous personalities have registered their visit to the institution.

RR’s visit was documented next to names such as Desmond Tutu, South African pacifist cleric who fought against Apartheid; young Greta Thunberg, Swedish activist and  student dedicated to raise awareness about global warming; Blanka Jamnišek, Slovenian who directs the International Holocaust Remembrance Alliance; Malala Yousafzai, young Pakistani dedicated to the defense of women’s rights; Nadia Murad, Yazidi young woman who escaped ISIS and has committed to denounce human trafficking; Natalya Estemirova, Russian woman dedicated to documenting and denouncing human rights violations in concentration camps and children victims of war. Among the signatures, it can also be found that of murdered Brazilian activist Nicinha, who led the Movement of People Affected by Dams in Rondonia.

In this way, Ramírez joins the long list of human rights fighters that have endured abuses and who have dedicated their lives to defending the most vulnerable and to condemn all forms of aggression against humanity.