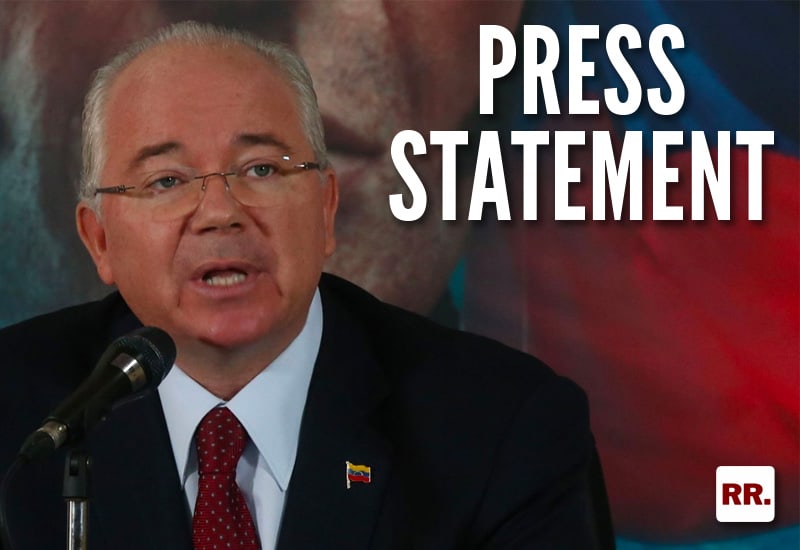 On June 9th , 2020, Judge Lee H. Rosenthal, of theUnited States District Court for the Southern District of Texas, vacated the $1.4B default judgment that had been entered previously on February 13, 2019, in connection with the civil lawsuit filed by Harvest Natural Resources, Inc. in February 2018.

The Court classified the “meritorious defense Ramírez rised“ as decisive for its ruling.
With this decision issued by Judge Lee Rosenthal, the justice is served by preventing the company Harvest Natural Resources, Inc. from taking advantage of the limitations that former Minister Rafael Ramírez had in learning about the defending lawsuit and completly exercising his defense, due to the fact that he was forced to go intoexile after resigning to his post as Ambassador and Permanent Representative of Venezuela to the United Nations on December 4th , 2017.

According to yesterday’s Court decision, the litigation on the merits of the civil claim that was filed in that Court by Harvest Natural Resources, Inc. will take continue. This case, which was based on lies and manipulation of public opinion, seeks to harm former Minister Rafael Ramírez for decisions taken events that occurred while he was Minister of Oil of the national government, acting in strict compliance with the Constitution and Venezuelan laws.

Former Minister Ramírez welcomes Judge Rosenthal’s decision for the case to proceed since this will be the first time ever that he will have the right to exercise hisdefense against the lies and systematic false accusations that have been made against his management in the service of the Venezuelan State, in defense of the country’s interests.

Harvest Natural Resources, Inc.’s lawsuit has been accompanied by all kinds of insults and defamations, which have affected the image and reputation of Rafael Ramírez, who will now have the opportunity to unmask the falsehood and bad faith in this company’sperformance.

Former Minister Ramírez will fully exercise his right to defense and to due process in the litigation, providing the Court with all the allegations and information that will lead to the establishment of the truth and the prevalence of justice