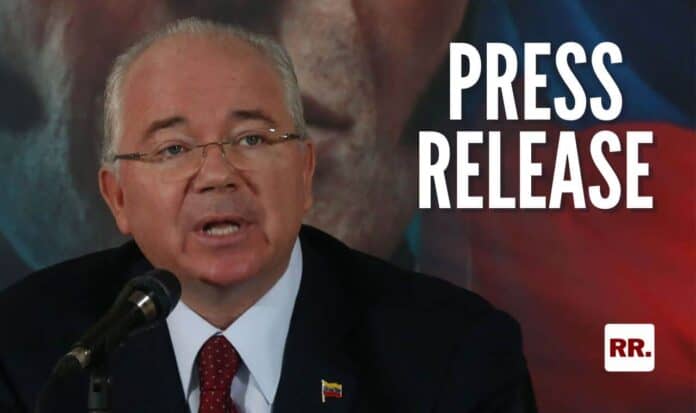 Yesterday, Thursday, February 25th, armed officials raided and occupied my house. This new irregular, repressive action of persecution and intimidation against my family and me took place while the Prosecutor was addressing the National Assembly, trying to evade his responsibilities in the violation of Human Rights.

My house, which was raided and occupied, has been my family’s home for more than twenty-one years. It was where my children grew up, acquired with the effort of my wife’s professional work as a practicing lawyer and university professor and mine as an engineer, long before I was appointed Minister of Petroleum and President of PDVSA.

The perpetrators of this new outrage did not care that currently, my house was inhabited, given my forced absence, by a family with two minor children. Due to the public and notorious threats received by Maduro’s government, I have not been able to return to my country, and I have to live in exile to preserve my life and the safety of my family.

This new aggression – illegal by all means – is part of Maduro’s continued violence against me. He abuses with all his power as Head of State and with his control over the Public Prosecutor’s Office and the Judiciary and the mass media’s monopoly, to persecute me, threaten me, and destroy any possibility of my return to the country.

I want to denounce to the Venezuelan people and the world -as I have just done before the Office of the UN High Commissioner for Human Rights- that my life and my family are in danger. As an act of personal revenge, Maduro is resolute to harass and attack me just because I raised my voice to denounce our country’s destruction and the concession of our oil.

The violence executed against me by Nicolás Maduro is with unprecedented fury and disproportion. The number of severe violations to my rights and guarantees, as well as the permanent hate speech, makes us suppose that another direct aggression against my family or me will arrive. As justification in front of the public opinion, all of the above, behind his lies and illegal manipulations.

They harass and attack me for political reasons, using the justice system as an instrument of justification and coercion, judicializing politics. This sad mechanism has been tried in our region against leftist leaders and former presidents such as Cristina Kirchner, Lula Da Silva, Dilma Rousseff, and Rafael Correa. Maduro’s government uses the same arguments and methods to persecute my family and me and attack anyone who opposes its whims and plans to hand over the country, the oil, and our political and social conquests.

Unlike the rest of Latin American states, Venezuela has no freedom of speech nor any possibility of defense. Fear and censorship have been built to hide the arbitrary acts and the human rights violation of anyone who opposes the designs of this minority group that controls the country.

There is no space in Venezuela for criticism, for dissent, to defend ideas, not even to answer government officials’ infamies; all this in a country needed with political discussion, proposals, and solutions. What is imposed today from the power is silence and instigation to a hatred that feeds fascist violence.

I hold Nicolás Maduro and prosecutor Tarek Williams Saab responsible for my life and the safety of my family, for being the direct instigators of the violence against me, violators of my right to the presumption of innocence, of my right to dignity and life.

Venezuela, today, is a dangerous country, with false positives, infamies, where innocent people are persecuted, where rigged files are raised, to justify before the public opinion, accusations, aggressions, and political persecution; where there is no rule of law, no separation of powers, no guarantees of any kind and the security forces and the Public Prosecutor’s Office is at the service of the discretion and the outbursts of the anger of the President, whose way of acting makes him equal to a tyrant.

I will continue to denounce before the corresponding instances the violation of my fundamental rights in my condition of a politically persecuted person. At the same time, I alert the popular movement, the Armed Forces, and all the country’s political and social factors about this vast and disproportionate campaign of persecution and violence against my family and me.

I will continue to raise my voice against the surrender of my country, protected by my word, my prestige, and trajectory, with the endorsement of having served Venezuela for twelve years as President Chávez’s Minister of Petroleum. I will continue on my path, unmasking this criminal government and advocating for the workers’ rights and the Venezuelan people.

I want to thank the solidarity of my neighbors, colleagues, friends, and personalities, and different national and international organizations for the defense of Human Rights. They have expressed their support and distress in the face of this new injustice committed against me.