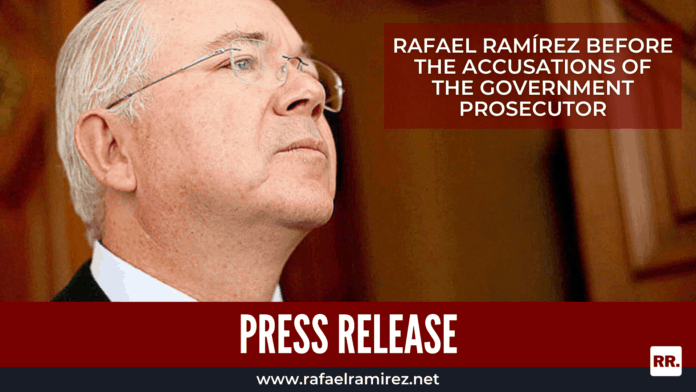 PRESS RELEASE RAFAEL RAMÍREZ BEFORE THE ACCUSATIONS OF THE GOVERNMENT PROSECUTOR

Caracas, February 18, 2021 – Today in the morning hours, prosecutor Tarek William Saab, once again lashes out against me, using unfounded accusations based on a press article, which lacks evidence to support the serious accusations and accusations issued by this official, which answers to evident political motivations.

This new media trick, this false positive, is generated in Spain, with information published by the mass media El País, where my name and image are linked to alleged criminal acts, without even presenting proof or an argument to support their accusations.

By this means, I demand from this Spanish media, characterized by its politically motivated positions, a right of reply. It is a right that I have as a citizen. No media can make false accusations that affect my name and reputation, and they cannot rise as a court of inquisition responding to their political interests.

It is not the first time that the government prosecutor, acting on behalf of President Maduro, who has engaged in a campaign of real moral lynching and political persecution, using the immense powers he abuses and the State institutions subordinated to his designs, to violate my fundamental human rights. Among them, the right to defense and the presumption of innocence.

The prosecutor, in particular, is lashing out against me, as he has done against hundreds of imprisoned or dead PDVSA workers and managers. Such as the case of former Minister Nelson Martínez, in order to hide the government’s disaster in Petróleos de Venezuela’s management. Today, the oil industry is in ruins due to internal political persecution and the diversion of resources, which is now being auctioned through the unconstitutional Anti-Blockade Law.

The prosecutor evades his responsibilities established in the Constitution to preserve due process and acts as an appendix of the government. He lends himself to political persecution while turning a blind eye or ignoring the commission of severe crimes against the Constitution and laws silenced for political expediency reasons.

I must clarify to the public opinion that I do not have any legal cause or trial in any country in the world. There is no international arrest warrant or Interpol action against me since none of these agencies are willing to act in political persecution cases.

The Maduro government, its prosecutor, and judiciary lack credibility and legitimacy in their actions before international organizations. On the contrary, it is public and notorious that it is the government’s high officials, including the president himself and his prosecutor, who are sanctioned. They are accused and have arrest warrants for serious criminal charges, among others, their links to drug trafficking and the commission of crimes against humanity against our citizens.

I want to reiterate my unyielding decision to stand by the Venezuelan people and firm in my political principles. These are the same principles that allowed me to serve for more than 12 years as Minister of Petroleum of the country and other high positions in the service of the Venezuelan State. I always watched over and worked following our Constitution, laws, and the country’s most sacred interests. Nothing and no one will make me deviate from this path.

I am grateful for the countless expressions of solidarity in the face of this new aggression by the government. Sooner rather than later, our country and its political and social forces will be able to reestablish popular sovereignty and constitutional order in our country.