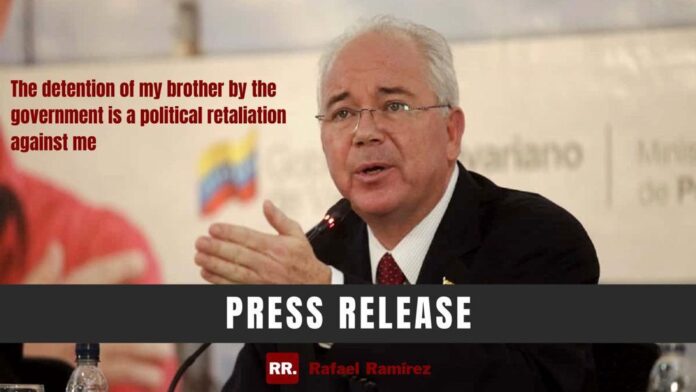 TO THE PUBLIC OPINION: THE DETENTION OF MY BROTHER BY THE GOVERNMENT IS A POLITICAL RETALIATION AGAINST ME

On Tuesday, September 13, officials from the General Directorate of Military Counterintelligence, DGCIM, broke into the medical office of my brother, Dr. Fidel Ramírez, from where they took him to the headquarters of said organization in Boleíta, in what constitutes a illegal detention and a political kidnapping.

The first few hours were filled with uncertainty for everyone, given that said military intelligence organization held my brother incommunicado, violating the due process.

My brother Fidel Ramírez is a recognized doctor in the country, with an impeccable ethical and professional career of more than 36 years at the service of the country. My brother has never been linked to the government or Petróleos de Venezuela, S.A (PDVSA), nor has he had any political action or responsibility in the country. His only public performance has been his medical diagnosis for the President of the Republic, Hugo Chávez, at a difficult time for the country.

His arrest by the DGCIM occurs on the direct orders of Nicolás Maduro, solely and exclusively as retaliation for my political position and my public announcement to run as a candidate for the Presidency of the Republic for the 2024 elections on behalf of the Bolivarian and Chavista sectors, as well as the broad sectors of the country that oppose the policies of this government, always in search of a Constitutional solution to the serious crisis that affects the entire country.

The government, through its highest political spokesmen, and in particular the Attorney General Tarek William Saab, intensified the attacks against me and my family, with false accusations and even the announcement of requesting extradition orders again, including that of my wife, oblivious to any political activity. The actions of the prosecution and the judiciary correspond to the practice of judicialization of politics, through which the government uses the judicial system as an instrument of political persecution, as determined in their reports the international human rights organizations.

The kidnapping of my brother by the Department of Military Intelligence is part of the pattern of action of the Maduro government called «SIPPENHAFTUNG«, denounced by the 2021 Report of the United Nations Human Rights Council (Fact Finding Commission), which states that government security and intelligence forces “…used criminal tactics including the kidnapping or detention of family members of real or perceived opponents to achieve arrests…”, this conveys that the international organizations responsible for ensuring respect for Human Rights have corroborated that the government of Nicolás Maduro applies this type of criminal methods of imprisoning or holding relatives of his political opponents as hostages as part of his state policy.

The actions of the Maduro government are of a fascist nature as it applies tactics created by the German Nazi government that have been replicated on our continent by the worst dictatorships, such as that of Jorge Videla and Augusto Pinochet, who seek to impose terror in order to silence criticism and maintain political control of the country through political persecution, cruel, inhuman and degrading treatment.

I make urge the International Community, the organisms responsible for the protection of human rights, and in particular the political and social sectors of the country to reject this action of the government that closes the spaces of political action for Venezuelans, curtailing our constitutional rights and imposing fear as the norm.

There is no individuality or any political or social sector in the country that is safe from this type of practice against them or their families, in a country where there is no rule of law or institutions that defend citizens.

I hold Nicolas Maduro directly responsible for the safety and physical integrity of my brother Fidel Ramírez and the rest of my family.

I demand the release of my brother, held hostage by the government.